A few days ago, I found a new near-miss to the 92 Johnson Solids. It appears on this blog, five posts ago, and looks a lot like what you see above — the differences are subtle, and will be explained below, after “near-miss” has been clarified.

Well, consider all possible convex polyhedra which have only regular polygons as faces. Remove from this set the five Platonic Solids:

Next, remove the thirteen Archimedean Solids:

Now remove the infinite sets of prisms and antiprisms, the beginning of which are shown here:

What’s left? The answer to this question is known; it’s the set of Johnson Solids. It has been proven that there are exactly 92 of them: 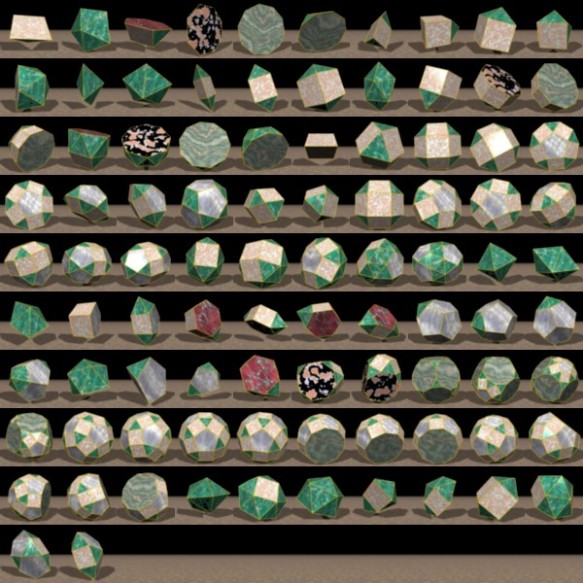 When Norman Johnson systematically found all of these, and named them, in the late 1960s, he found a number of other polyhedra which were extremely close to being in this set. These are called the “near misses.” An example of a near-miss is the tetrated dodecahedron, which I co-discovered, and named, about a decade ago:

If you go to http://www.software3d.com/Stella.php, you can download a free trial version of software, Stella 4d, written by a friend of mine, Robert Webb (RW), which I used to generate this last image, as well as the rotating .gif which starts this post. (The still pictures were simply found using Google image-searches.) Stella 4d has a built-in library of near-misses, including the tetrated dodecahedron . . . but it doesn’t have all of them.

There is no way to justify an arbitrary rule for just how close a near-miss must be to “Johnsonhood” be considered an “official” near-miss, so mathematicians have made no such rule. Research to find more near-misses is ongoing, and, due to the “fuzziness” of the definition, may never stop.

My informal test for a proposed near-miss is simple:  I show it to RW, and if he thinks it’s close enough to include in the near-miss library in Stella 4d, then it passes. This new one did, but not until RW found a way to improve it, using something I don’t really understand called a “spring model.” What you see at the top of this post is the result. Unlike in the previous version, the green decagons here are regular, but at the expense of regularity in the (former) blue squares, now near-squarish trapezoids, as well as the yellow hexagons. The pink hexagons are slightly irregular in both versions, and the red pentagons are regular in both.

I’m eagerly anticipating the release of the next version of Stella 4d, for this near-miss will be in it.  If I tell my students about this new discovery, they’ll want to know how much I got paid for it, which is, of course, nothing. I don’t know how to explain to them what it feels like to participate in the discovery of something — anything — which will survive me by a very long time. There’s nothing else quite like that feeling.

Now I just need to think of a good name for this thing!

[Update:   the new version of Stella is now out, and this polyhedron is now included in it. As it turns out, I no longer need to think of a name for this polyhedron, for RW took care of that for me, naming it the “zonish truncated icosahedron” in Stella‘s built-in library of polyhedra.]