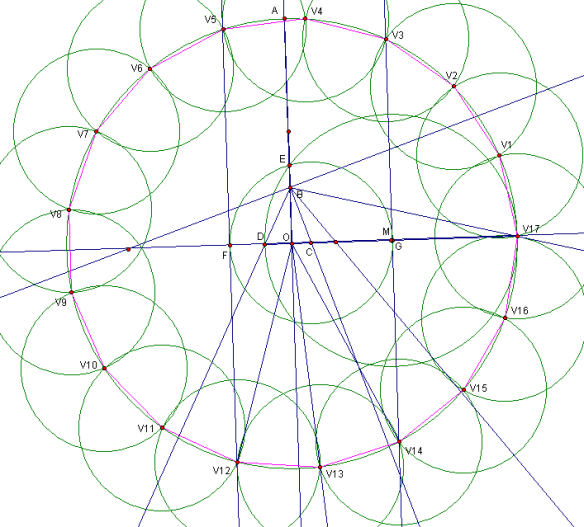 The regular heptadecagon construction, however, I did not figure out independently. I used instructions found here (http://www.mathpages.com/home/kmath487.htm), which built on the work of Carl Friedrich Gauss, who, in 1796, at the age of 19, became the first person in history to determine that such a construction is possible with the traditional Euclidean tools.

A word of warning, if you attempt to replicate this construction yourself: points M and G are merely close together, but are not in the same place. Point M is the center of the circle which passes through points D and V17, while point G is one of the two points of intersection of (1) the line passing through points O and V17, and (2) the circle centered at C, and passing through E.

A man named Johann Gustav Hermes once spent ten years completing a 200-page manuscript showing how to construct the regular polygon with 65,537 sides, and I believe he actually performed the construction, as well. I will not be constructing this polygon — ever. I will, however, figure out a proper name for it. Let’s see . . . it’s the heptakaitriacontakaipentacosioikaipentachilikaihexamyriagon. Try saying that five times in a row, quickly!