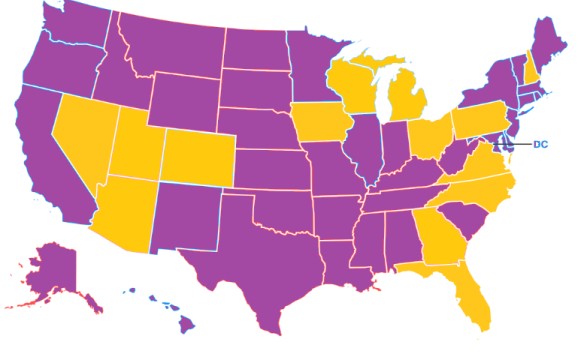 If you live in one of the states shown in gold, congratulations — both the Trump and Clinton campaigns want your vote, for you live in a “battleground” or “toss-up” state, or at least one that only slightly “leans Democrat” in polls, or “leans Republican.”

The states shown in purple, on the other hand, are taken for granted by one campaign, while the other campaign regards them as “lost causes.” My own state, Arkansas, for example, is solid Trump territory, even though I can’t stand the man. These states don’t offer a competitive race.

In a presidential campaign where most people are voting against someone, rather than voting for anyone, this map is important for strategic voting. In my case, for example, I see the two major parties as offering me a choice between bad (Clinton) and worse (Trump). If I lived in a golden state, I’d probably hold my nose and vote for Clinton, for, in such a state, the urge to stop Trump would compel me to vote against the person with the best chance of beating Trump.

However, my state is purple. It’s solid Trump-turf. Hillary Clinton herself knows she won’t carry Arkansas. My anti-Trump vote is largely symbolic, and, as such, I want to use it to send a message to both the Republican and Democratic parties. It’s a simple message: “give us better choices.” To send such a message, I need to vote for someone else, and there are two major alternatives: Gary Johnson, the Libertarian candidate (his website is at https://www.johnsonweld.com/), and Dr. Jill Stein, the Green candidate (her website is at http://www.jill2016.com/). To make a statement that the government needs to pay more attention to carbon emission and climate change (and the major parties need to give us better candidates in elections), I’ve decided to vote Green this year.

This same logic would hold true were I in, say, New York, also purple. New York is purple because both candidates know it is a “safe” Clinton state. If I lived there, Clinton would carry that state with or without my vote, so, again, I would cast my protest vote for Jill Stein.

To the majority who live in purple states, and dislike both Trump and Clinton, I ask you to consider casting your vote for either Johnson or Stein. Voters in the golden states, on the other hand, are involved in competitive races, and (pragmatically) should vote for Hillary Clinton if they want to do anything to stop Trump, or vote for Trump if they are willing to vote for anyone to keep Hillary Clinton out of the White House.

It is a shame that votes matter more in some states, and don’t matter as much in others. For this reason, I would favor an Amendment to the Constitution to abolish the electoral college, and choose our presidents by direct popular vote, with a two-person, nationwide runoff election a month later, if the candidate with the most votes only wins a plurality of the popular vote in November.