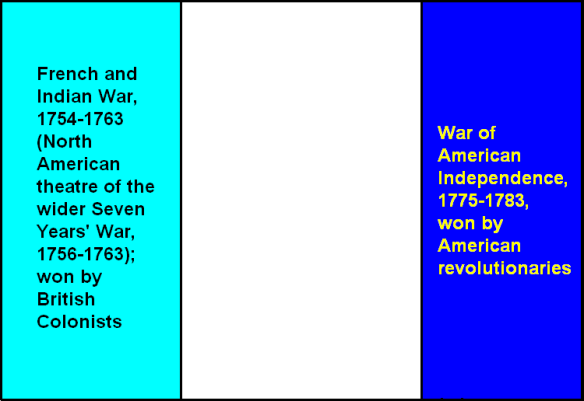 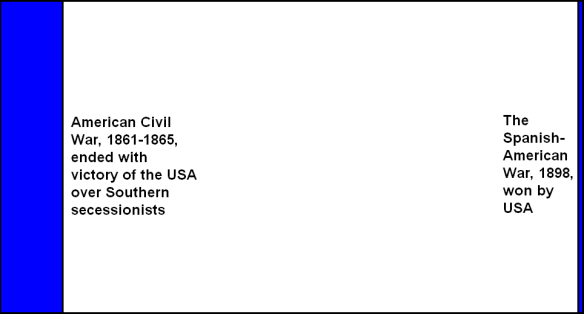 Beginning in 1945, things get complicated, with an ideological war (the Cold War) occasionally turning “hot,” as it did in Korea and Vietnam. A similar “it’s complicated” situation appears later, during the ongoing War on Terror. Also, the Vietnam War makes two new colors needed:  orange, for pre-USA-involvement in wars that ultimately lead to a defeat for the USA, and red, for the period leading up to a loss for the USA which actually involved American personnel.

When the Soviet Union fell in 1991, ending the Cold War, some actually wrote of “the end of history,” as if the world had suddenly became uncomplicated. Subsequent events proved this idea to be premature.

Since the War on Terror, as well as its component in Afghanistan, is unresolved as of now (2014), a new color, green, is used here for ongoing conflicts.

Finally, it should be pointed out that the administration of George W. Bush tried to sell, to the American public and others, the idea that the 2003-2011 Iraq War was part of the War on Terror. Many Americans, however, myself included, do not accept this rationale, for no connection has been established between Iraq, on the one hand, and the 11 September 2001 terrorist attacks against multiple targets in the USA, on the other.