I’ve been asked this question at least a hundred times. The answer is that my favorite color is black.

Black has been my favorite color for decades. As a college freshman, I even kept a black posterboard up on the wall, in my room at the dorm. Also, I don’t think I have ever been afraid of the dark. I actually find darkness comforting.

I usually get a protest, as a response, when I give my simple answer to this question: “Black’s not a color!”

At that point, nearly every time, I can end debate with a single question to my inquisitor: “What color is your t-shirt?” Sometimes they even look down at their shirt when I say this, and here’s what they typically see: 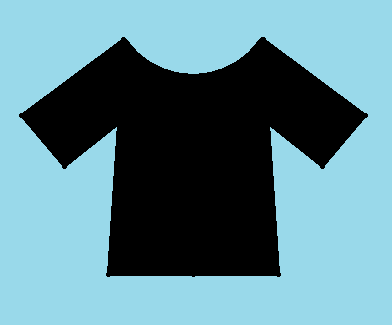 I have no explanation for why the people who ask me to identify my favorite color are usually wearing black, but at least it quickly ends the conversation.

First, I answer the question honestly, with a single word, by simply naming my favorite color.

After telling this one-word, five-letter truth, I then get a response which has become utterly predictable: “Black’s not a color!”

Even stranger: such inquisitions only seem to come from teenagers who are dressed in such a way as to let the following response work: “What color is your t-shirt?”

Sometimes they even look down at that point, presumably to check, which lets them see the answer to my question for themselves:

After that one question from me, for some reason, they tend not to say much more.