We have found compelling evidence for the existence of several sub-surface oceans in various places in our solar system. The most well-known of these bodies of liquid water is under the ice crust of Europa, a moon of Jupiter, with others located elsewhere. These oceans are logical places to look for signs of past or present extraterrestrial life. However, we have yet to obtain a sample of any of these oceans for analysis. It is time for that to change, but not without taking precautions to avoid damaging any such life, should it exist. 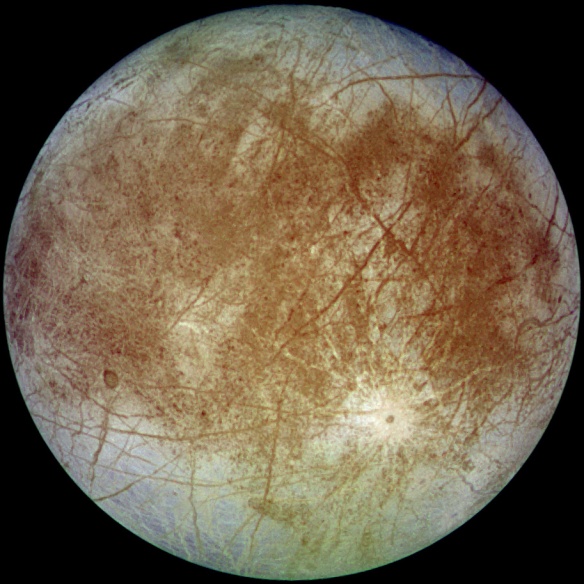 What follows is my idea, freely available for anyone who wishes to use it, to safely obtain and analyze such samples. These ice-tunneling probes could be ejected from a larger lander, or simply dropped directly onto the surface from orbit. This would be far less expensive than any sort of manned interplanetary exploration. Exposure to vacuum and radiation, in space, would thoroughly sterilize the entire apparatus before it even lands, protecting anything which might be alive in the ocean underneath from contamination by organisms from Earth.

In this cross-sectional diagram, the light blue area represents the ice crust of Europa, or another solar-system body like that moon. The ice-tunneling lander is shown in red, orange, black, yellow, and green. The dark blue area is the vertical tunnel created by the probe, shown shortly after tunneling begins. As the probe descends, the dome shown in gray caps the tunnel, and stays on the surface, having been previously stored, folded up, in the green section of the egg-shaped probe. The gray section is designed as a geodesic dome, with holes of adjustable size to allow heat to escape into space. An extendable, data-carrying tether connects the egg-shaped tunneling module to the surface dome. Solar-energy panels and radio transmitters and receivers stay at the surface, attached to the gray dome.

The computers necessary to operate the entire probe are in the yellow section. The black section that extends outward, slightly, from the body of the tunneler would contain mechanisms to obtain samples of water for analysis. The orange section is where actual samples are stored and analyzed.

The red part of the tunneler is weighted, so that gravity forces it to stay at the bottom. It is designed to heat up enough to melt the ice underneath it, allowing the entire “egg” to descend, attached to its tether. Water above the tunneling probe re-freezes, sealing the tunnel so that potentially-damaging holes are not left in the ice crust of Europa. The heating units in the red section can be turned on and off as needed, to slow, hasten, or stop the probe’s descent through the crust.

Oceans in other places in the solar system might require certain adjustments to this design. For example, Ganymede, another moon of Jupiter, is far rockier than Europa. If this design were used on Ganymede, the tunneling probe would likely be stopped by sub-surface rocks. For this type of crust, the probe’s design could be modified to allow lateral movement of the tunneler, in order to go around rocks. 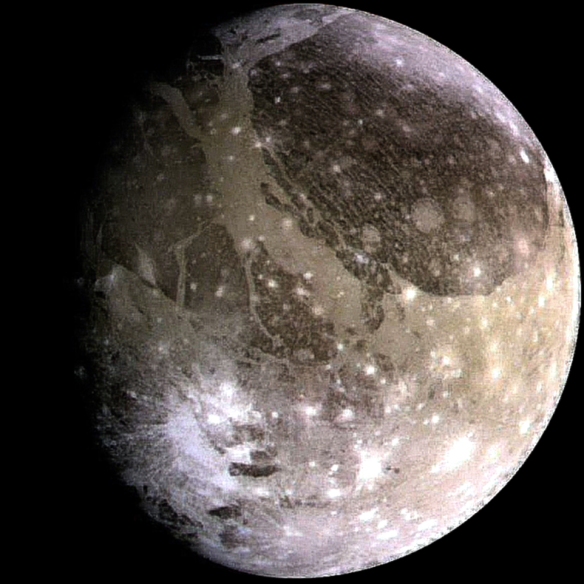 On Europa, Ganymede, and elsewhere, one limitation of this design is imposed by the maximum length of the tether. We would not want to go all the way down to the subsurface oceans with the earliest of these probes, though. A better strategy would be to only tunnel part-way into the crust at first, capturing liquid samples of water before refreezing of the ice. After all, this ice in the crust could have been part of the lower, liquid ocean at some point in the past, and it should be analyzed thoroughly before heat-tunneling any deeper. The decision to make the tether long enough to go all the way through the crust, into the subsurface ocean itself, is not one to make lightly. It would be best to study what we find in molten crust-samples, first, before tunneling all the way through the protective crusts of these oceans.

These are compelling reasons to leave use of mercury to those at the college level, or beyond. In the opinion of this science teacher, use of liquid mercury in science classes, up through high school chemistry, inside or outside thermometers, is a bad idea. If the bulb at the bottom of a thermometer, as well as the colored stripe, looks silvery, as in the picture below (found on Wikipedia), then that silvery liquid is mercury, and that thermometer should not be used in labs for high school, let alone with younger children. Your local poison control center can help you find the proper thing to do with mercury in your area; it should definitely not just be thrown away, for we do not need this serious environmental toxin in landfills, where it will eventually reach, and poison, water. Red-stripe thermometers without any silvery line, on the other hand, are far safer, although broken glass can still cause injury. 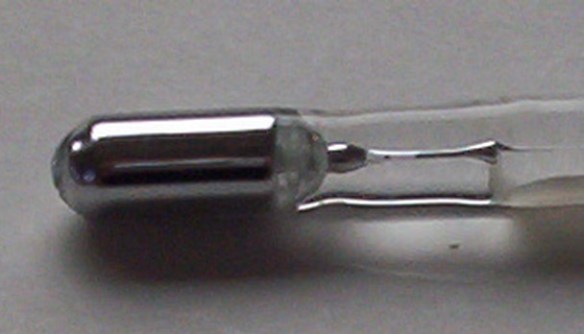 I turned ten years old in 1978, and, by that time, I had already spent many hours playing (unsupervised) with liquid mercury, pouring it hand-to-hand, etc., so I know exactly how irresistible a “plaything” mercury can be, to children. Luck was on my side, and I suffered no ill effects, but I can state from experience that children should not be tempted with highly-toxic “mercury as a toy,” for it’s not a toy at all. Mercury spills require special “hazmat” training to clean up safely; anyone encountering such a spill who does not have such training should simply notify the proper authorities. In the USA, this means evacuating the area immediately, and then calling 911 — from far enough away to keep the caller from breathing invisible mercury vapor.

Fortunately, there is a safe alternative which can give students a chance to experiment with a room-temperature metal: an alloy of three parts gallium to one part indium, by mass. Gallium’s melting point is between normal human body temperature and room temperature, so it can literally melt in your hand (although a hot plate is faster). Indium, on the other hand, has a melting point of 156.6°C. For this reason, I will not buy a hot plate unless it can reach higher that that temperature. (Note: use appropriate caution and safety equipment, such as goggles and insulated gloves, with hot plates, and the things heated with them, to avoid burns.)

Once both elements are massed, in the proportions given above, they can then be melted in the same container. When they melt and mix together, they form an alloy which remains liquid at room temperature.

Some might wonder how mixing two elements can create an alloy with a melting point below the melting points of either of the two ingredients, and the key to that puzzle is related to atomic size. Solids have atoms which vibrate back and forth, but don’t move around each other. In liquids, the atoms are more disordered (and faster), and easily slip around each other. In solid, room-temperature gallium, all the atoms are of one size, helping the solid stay solid. Warm it a little, and it melts. With pure indium, this applies, also, but you have to heat it up a lot more to get it to melt. If the two metals are melted and thoroughly mixed, though, and then frozen (a normal freezer is cold enough), the fact that the atoms are of different sizes (indium atoms are larger than gallium atoms) means the atoms will be in a relatively disordered state, compared to single-element solids. In liquids, atoms are even more disordered (that is, they possess more entropy). Therefore, a frozen gallium/indium alloy, with two sizes of atoms, is already closer to a disordered, liquid state, in terms of entropy, than pure, solid gallium or indium at the same temperature. This is why the gallium-indium mixture has a melting point below either individual element — it requires a lower temperature to get the individual atoms to flow past each other, if they are already different atoms, with different sizes.

Those who have experience with actual liquid mercury will notice some important differences between it and this gallium-indium alloy, although both do appear to be silver-colored liquids. (This is why mercury is sometimes called “quicksilver.”) For one thing, their densities are different. A quarter, made of copper and nickel, will float on liquid mercury, for the quarter’s density is less than that of mercury. However, a quarter will sink in liquid 3:1 gallium-indium alloy. To float a metal on this alloy, one would need to use a less-dense metal, such as aluminum or magnesium, both of which sink in water, but float in liquid Ga/In alloy.

Other differences include surface tension; mercury’s is very high, causing small amounts of it on a floor to form little liquid balls which are difficult (and dangerous) to recapture. Gallium-indium alloy, by contrast, has much less surface tension. As a result, unlike mercury, this alloy does not “ball up,” and it will wet glass — and doing that turns the other side of the glass into a mirror. Actual mercury will not wet glass.

The most important differences, of course, is that indium and gallium are far less toxic than mercury, and that this alloy of those two elements has a much lower vapor pressure than that of mercury. Gallium and indium are not completely non-toxic, though. Neither indium nor gallium should be consumed, of course, and standard laboratory safety equipment, such as goggles and gloves, should be worn when doing laboratory experiments with these two elements.