These polyhedral images were created with Stella 4d, a program you may try for free at this website.

An average human life-span in the 70s seems much better now that I’m back before the midway-point. =D

Dave Smith discovered the polyhedron in the last post here, shown below, with the faces hidden, to reveal how the edges appear on the back side of the figure, as it rotates. (Other views of it may be found here.)

So far, all of Smith’s “bowtie” polyhedral discoveries have been convex, and have had only two types of face: regular polygons, plus isosceles trapezoids with three equal edge lengths — a length which is in the golden ratio with that of the fourth side, which is the shorter base.

He also found another solid: the second of Smith’s polyhedral discoveries in the class of bowtie symmetrohedra. In it, each of the four pentagonal faces of the original discovery is augmented by a pentagonal pyramid which uses equilateral triangles as its lateral faces. Here is Smith’s original model of this figure, in which the trapezoids are invisible. (My guess is that these first models, pictures of which Dave e-mailed to me, were built with Polydrons, or perhaps Jovotoys.) 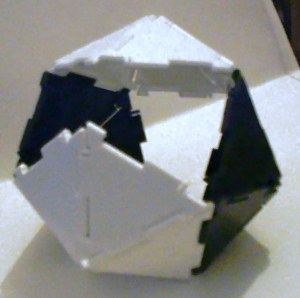 With Stella 4d (available here), the program I use to make all the rotating geometrical pictures on this blog, I was able to create a version (by modifying the one created by via collaboration between five people, as described in the last post) of this interesting icositetrahedron which shows all four trapezoidal faces, as well as the twenty triangles.

It is difficult to find linkages between the tetrapentagonal octahedron Smith found, and other named polyhedra (meaning  I haven’t yet figured out how), but this is not the case with this interesting icositetrahedron Smith found. With some direct, Stella-aided polyhedron-manipulation, and a bit of research, I was able to find one of the Johnson solids which is isomorphic to Smith’s icositetrahedral discovery. In this figure (J90, the disphenocingulum), the trapezoids of this icositetrahedron are replaced by squares. In the pyramids, the triangles do retain regularity, but, to do so, the pentagonal base of each pyramid is forced to become noncoplanar. This can be difficult to see, however, for the now-skewed bases of these four pyramids are hidden inside the figure.

Both of these solids Smith found, so far (I am confident that more await discovery, by him or by others) are also golden polyhedra, in the sense that they have two edge lengths, and these edge lengths are in the golden ratio. The first such polyhedron I found was the golden icosahedron, but there are many more — for example, there is more than one way to distort the edge lengths of a tetrahedron to make golden tetrahedra.

To my knowledge, no ones knows how many golden polyhedra exist, for they have not been enumerated, nor has it even been proven, nor disproven, that their number is finite. At this point, we simply do not know . . . and that is a good way to define areas in mathematics in which new work remains to be done. A related definition is one for a mathematician: a creature who cannot resist a good puzzle. 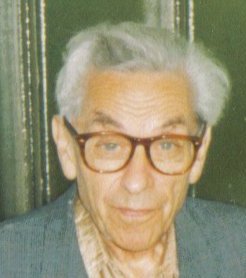 As was written in The New York Times when his biography, The Man Who Loved Only Numbers, was reviewed (1998), Paul “Erdős (pronounced “air-dish”) structured his life to maximize the amount of time he had for mathematics. He had no wife or children, no job, no hobbies, not even a home, to tie him down.”

This was during most of the Cold War between, at the forefront of each side, swaggering mightily like something straight out of a comic book, the USA and the USSR. Except … this wasn’t a comic book. You really could die. Younger people don’t really know what this is like, for the simple reason that the threat of imminent. sudden extinction hasn’t been present since the Cold War ended. The world faces disasters, of course, but a sudden one, greater than the large-city scale, is unlikely in the extreme — now.

Erdős had little regard for Uncle Sam (that’s the United States), nor Uncle Joe (the Soviet Union, with “Joe” being a caricature of Josef Stalin), but he did enjoy clever ridicule, so he heaped contempt, publicly, on both sides, during the Cold War. He wasn’t a big fan of the S.F., either (that’s Supreme Fascist — of the Universe. Guess who. Yep. That’s the guy. Why is God always a guy?)

Erdős just wanted to do math, and this native of Hungary simply dismissed all else. Mathematicians need other mathematicians to talk to, for they are already crazy, in very specific and sometimes unintentionally useful ways, and need other people also so afflicted to talk to, lest they torment the uninterested with mathbabble. That is only one way of looking at it, of course, as people have explained to me about my own mathbabble, which is insufficiently advanced to allow me to comprehend that of Erdős himself.

Life was viewed differently by Erdős, and I do not mean in any way that would seem “normal” to any mathematics professor you might have met (feel free to ask them). If you worked on proving theorems, solving problems, proving certain problems can’t be done — all of which are varied ways of describing the same activity — then you were, to Erdős, “alive.” If you stopped doing mathematics, you “died.” I don’t know what he thought of those who never did mathematics, because he avoided interacting with them. With no home, he could simply get on a plane when all the local mathematicians were exhausted, their brains tired, and he would then go to another continent — there were several available, and he did this for decades — and the local mathematicians would welcome him with open arms, for it was an honor to have Erdős as a guest in one’s home.

The Man Who Loved Only Numbers: The Story of Paul Erdős and the Search for Mathematical Truth, biography by Paul Hoffman, 1998.

More Erdős vocabulary:
“Women” were “bosses,” with “men” translating as “slaves,” in Erdős’s unique language of his own invention. Children were “epsilons,” and if you laughed at that, I do hope you are happy with the fact that you, too, are a math nerd. (For the benefit of those who aren’t, “epsilon” is a symbol often used, in mathematics, for variables with very small values.) There’s a lot more — and links to use to help you find it, right up there.