[This theorem was proven long ago, in other ways, but this is my way to prove it.]

[I have now fulfilled my ambition to use the phrase “randomly jumble up” in a formal proof.]

There is more than one way to construct a golden rectangle using the Euclidean rules, but all the ones I have seen before use circles with irrational radii. This construction, which I believe to be new, does not use that shortcut, which helps explain its length. The cost of avoiding circles of irrational radius is decreased efficiency, as measured by the number of steps required for the entire construction.

In the diagram below, the distance between points A and B is set at one. All of the green circles have this radius, while the magenta circles have a radius exactly twice as long. 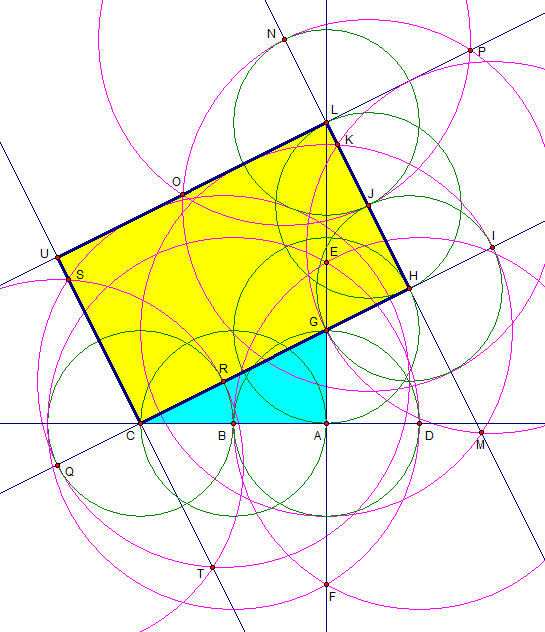 To make following the construction from the diagram above easier, I named the points in alphabetical order, as they appear, as the construction proceeds. The yellow rectangle is the resulting golden rectangle. The blue right triangle is what I used to get a segment with a length equal to the square root of five, which is a necessary step, given that this irrational number is part of the numerical definition of the exact value of the golden ratio (one-half of the sum of one and the square root of five). In order to make the hypotenuse have a length equal to the square root of five, by the Pythagorean Theorem, the two legs of this triangle have lengths of one and two.