As new pics from the Pluto/Charon system become available, you can’t beat the image gallery at the New Horizons portion of NASA’s website to keep up with them, which is where I found this .gif file showing images of Pluto itself throughout the years. It culminates in the latest, and most detailed, image of any part of Pluto — a small portion of its surface. To see more of the latest pics, as they are released, I refer you to that web-page. NASA plans to keep it updated with the latest from the Pluto/Charon system, for months to come, as new images are transmitted, received, and processed.

The big surprise today is not the “heart of Pluto” that’s gotten so much press this week, but something newly discovered (and completely unexpected) with the latest small batch of new pics: on both Pluto and Charon, they can’t find a single impact crater. Not one. And that is just flat-out weird. Here, see for yourself (same image source): unexpected ice mountains, check; unexpectedly-smooth plains, check; craters — hey, the craters are missing!

According to everything we know, impact craters should be there. The ice mountains and numerous plains are mysteries, also, but it is the lack of craters which really has scientists puzzled this morning. Everyone expected to see lots of impact craters, myself included. Small worlds, so far from the sun, should have frozen internally long ago, based on present models, making them geologically dead, and therefore unable to “erase” impact craters (seen on dozens of other planets, dwarf planets, satellites, and asteroids) with surface-altering geological activity. This mass-erasure-of-craters happens on a only a few other solid bodies in the solar system, such as Earth, and Jupiter’s moon Io — both larger, and much warmer, than anything in the Pluto/Charon system. Some scientists are already going public with conjectures for the energy source needed to keep Pluto and Charon crater-free. However, I have yet to read any such conjecture which I find convincing, which is why I am not including them in this post. (Such guesswork is easy to find, though, here, among other places.)

On the other hand, the scientific community has had very little time, yet, to explain this new puzzle; there might be a convincing explanation out there by this time next week — or this could persist, as one of many mysteries in astronomy, for decades. At this point, it is too early to even venture a guess regarding when, if ever, this mystery will be solved. 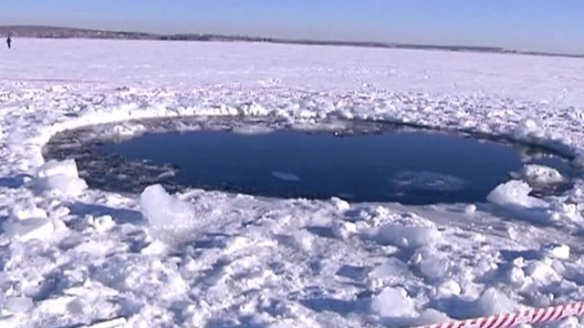 Can you imagine what it would be like to encounter such a thing as this crater?

Can you imagine what it is like to have every window in your whole region suddenly turned into a shower of broken glass, with the temperature at -15 degrees Celsius, as many thousands did?

Thus far, no deaths are known to have happened from this February 15 airburst, nor the 1908 Tunguska Event, the largest in recorded history. In that sense, the Russians lucked out. Twice.