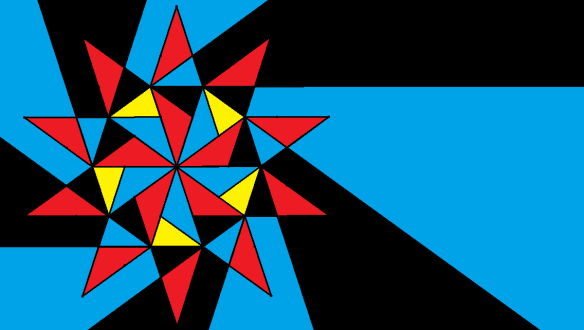 There. Now, if I ever start an independent country, I’ll at least have a new flag ready.

I thought I knew the (rather complicated) history of the “Pledge of Allegiance” well — until I saw this picture. This was the original “flag salute” pose American students were taught to use, nationwide, until World War II was well underway. It had been in use since 1892, and was called the “Bellamy salute.”

The current “hand over the heart” gesture didn’t go into effect until 1942, and was changed in reaction to the Nazis using essentially the same salute which you see American schoolchildren displaying in this (circa 1941) photograph. From where did this gesture really originate? A common belief is that it started in ancient Rome, but the article at http://en.wikipedia.org/wiki/Roman_salute — and the sources cited there — throw doubt on this idea. It seems that, instead, this gesture was depicted in an 1874 painting of an ancient Roman scene, spread into other neoclassical artworks, then plays and other performances, until it was well-established in the public consciousness as something the ancient Romans did — but that belief appears to be unsupported by the relatively small number of actual writings, or works of art, which have survived from ancient times.

It was twelve years after the change in the civilian American flag-salute gesture that Congress made another, much better-known change — the 1954 addition (unconstitutional, in my opinion) of the words “under God.” Just as the early gesture-change was made, in wartime, as a reaction against the practices of an enemy, arguments have been made that this change in the wording of the Pledge was made for similar reasons, given that we were then in the early years of the Cold War, with America’s enemies, in that long struggle, being what were often called the “Godless Communists.”

[Additional source, beyond the one given above: http://en.wikipedia.org/wiki/Pledge_of_Allegiance (with more sources cited at the bottom of that article)].