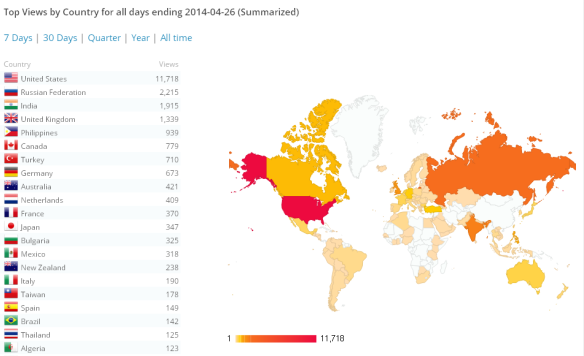 This map shows where the hits on this blog have come from, since its inception.

A notable exception: Iran shows zero hits. However, I know that people in Iran have seen https://robertlovespi.wordpress.com/2012/12/02/love-letters-from-iran/ — but access to the Internet from inside Iran is difficult. Hits from inside Iran show up on this map, no doubt, but they show up as hits from other, less repressive countries.

I also don’t believe for one moment that no one from China has seen my blog. The suspiciously high number of hits from Taiwan make me suspect Internet traffic is simply being routed from The People’s Republic, through Taiwan, to get to the rest of the world.

Information wants to be free. People do, too — and are finding ways around those forces which seek to control us. 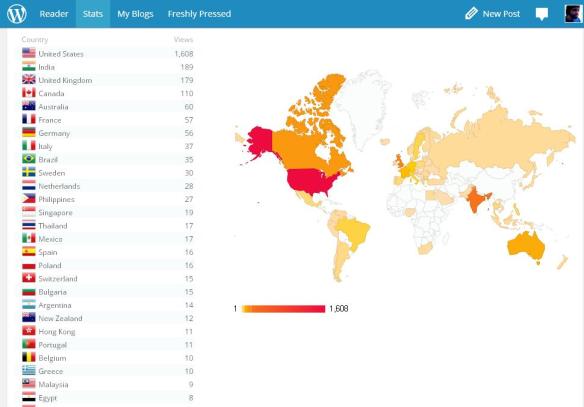 Since I’ve started blogging on WordPress, there have been several surprises, but the most puzzling to me is the recent rise in popularity of my blog in India. I live in the USA, so it’s no surprise that most hits on my blog come from here. However, I have no explanation for why India is #2.

This blog has a high math content, compared to most blogs. Might that have something to do with it?

Whatever the reason, I’m glad I have readers there.

The part of this map I don’t like involves China, Iran, and North Korea: zero hits from each nation. That has nothing to do with the content of my blog, of course, but with heavy censorship in each of those countries, all of which have notoriously bad human-rights records. In at least one of those nations (Iran), my blog has been read, but that doesn’t show up on this map because of the extreme lengths my friends in Iran have to go to simply to surf the web without detection and interference from Tehran.

I would like, someday, to visit all of these countries. In the cases of Iran, North Korea, and China, though, I’m waiting for regime changes first.

Sometimes the universe has unusual ways of letting you know when you complain too much. I mean, yes, I’m in the middle of a difficult labor struggle, and there’s nothing easy about it. I have other struggles as well. However, my problems are trifling compared to those of many people in the world. For example: 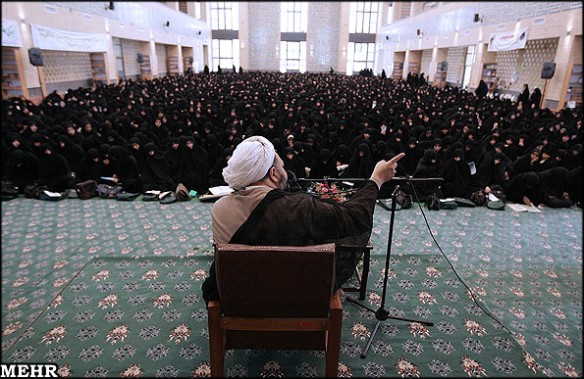 This is an image from within today’s Iran. It shows a scene from inside a women’s seminary. Think about this: the only reasons you and I are not trapped in the same situation as these women are simple accidents of birth.

There’s been a lot of talk lately about a possible war on the horizon involving Iran, Israel, and the United States. This is an unspeakably bad idea. Do I like the Iranian government? Not in the slightest. I do, however, have friends among the Iranian people. My friends there are Greens.

In 2009, there was an election in Iran that was “stolen” by those already in power. “Green Revolution” protests rocked that country, and beyond, and it was the first mass movement of its type to involve social media on a large scale. It’s been called “The Twitter Revolution” for just this reason, and YouTube, Facebook, etc. were used by the Greens as well. All of my own skills as an Internet activist started during this period, with the Greens being my first teachers. Cyberspace has a nullifying effect on geographical barriers, such as the fact that there’s a planet between Iran and my computer. Here’s a 2009 scene from Tehran: 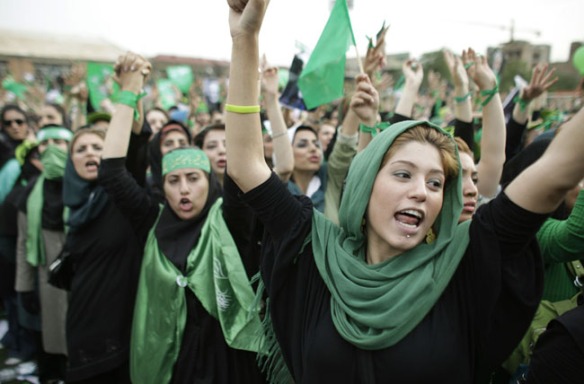 The Greens wanted to bring down the regime in Iran. They tried. Hard. Many outside Iran, including myself, did everything we could to help.

This is how the government in Iran responded. 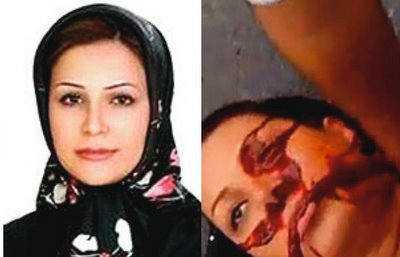 This young woman’s name was Neda, and she became a martyr to the attempted revolution when the image on the right became widespread. Less well-known, though, were other atrocities which didn’t make their way into the Western media, such as soldiers of the regime entering college dormitories and hospitals to attack suspected Greens right in their beds. I know they did such things because friends there told me what was going on, as it happened.

The worst thing about the Green Movement, as least the first part of it, is that it did not succeed. The protesters were forced underground. Some Greens on my Facebook friends’-list simply fell silent, and some of those Greens are undoubtedly dead.

I still have hope, though, that if the insanity of a war can be avoided, the regime will fall to the second part of the Green Revolution, which is yet to come. The survivors give me such hope.

They were silent for a long time, and I read news reports about Iran erecting a “Great Firewall” modeled after the one in China, with the goal of completely controlling all Internet traffic. Many sources will tell you this firewall is firmly in place.

Well, their firewall has leaks. The Greens are in hiding, yes, but they haven’t given up, and they have hacking skills which are among the best in the world. A few months ago, they started bursting through — coincidentally, right when I needed a boost because of my own, far less serious struggles — in the form of “likes” on my Facebook-wall. Since then, communication has become easier (even as Tehran has tried to make it harder), and I now chat with my Green friends whenever I want to.

When these “likes” and comments and private messages started coming through recently, I nicknamed such communications “love letters from Iran.” Such messages are not, of course, sent without risk. They give me a boost like nothing else, for these are the most courageous people I know. Different types of love exist, of course, and ours is the unique kind that can only come from sharing a struggle. It helps keep me going.

Greens breaking through that firewall on a small scale could mean that breaking through on a larger scale is coming soon. Also, the Greens are many and young, and those running the regime are few, and, for the most part, old. Those in power won’t live forever, and they don’t trust the young enough (with good reason) for there to be a smooth transition in Iran. I am optimistic that the Green Revolution will soon make a comeback. If it does, just like in 2009, I will do everything I can, from here, to help.