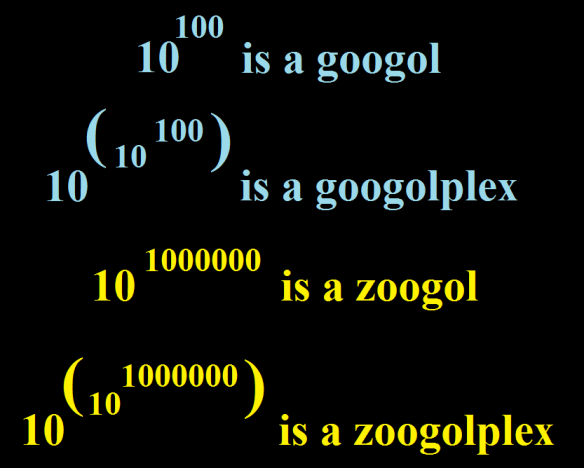 Portmanteaus of the words “zillion” and “googol” / “googleplex,” these two new number-names are offered for the use of anyone who feels a need for even more named numbers which are ridiculously larger than the number of particles known to exist. The vast majority of those particles are neutrinos, by the way, but fewer than a googol (let alone a zoogle) neutrinos are estimated to exist in the entire observable universe.

To write a zoogle out the long way, simply write a “1,” then follow it with a “mere” one million zeroes. To my knowledge, this has never been done, but it certainly is possible. To write out a zoogleplex the long way, you’d need to follow the “1” with a zoogol zeroes, but this is not possible, due to a lack of enough matter or space, in the entire universe, for such a task.

Pop quiz: which is larger: a googleplex, or a zoogle? Scroll down to find the answer, whenever you are ready.