This polyhedron is chiral, meaning that (unlike many well-known polyhedra) it exists in “left-handed” and “right-handed” forms — reflections of each other. These “reflections” are also called enantiomers. I call this polyhedron “sixty and sixty” because there are sixty faces which are irregular, purple quadrilaterals, as well as sixty faces which are irregular, orange pentagons.

I stumbled upon this polyhedron while playing around with Stella 4d: Polyhedron Navigator, software you can try right here. For those who research polyhedra, I know of no better tool.

To see the other enantiomer, there is a simple way — just hold a mirror in front of your computer screen, with it showing the image above, and look in the mirror!

With any chiral polyhedron, it is possible to make a compound out of the two enantiomers. Here is what the compound looks like, for this “sixty and sixty” polyhedron cannot be seen this way, so here is an image of it, also created using Stella 4d.

Like the snub dodecahedron itself, both of these polyhedra are chiral, and any chiral polyhedron can be used to create a compound of itself and its own mirror-image, Below, you’ll find these enantiomorphic-pair compounds, each made from one of the two polyhedra above, together with its own reflection.

All four of these images were created using Stella 4d: Polyhedron Navigator, software available (including a free trial download) at this website.

For any given chiral polyhedron, a way already exists to combine it with its own mirror-image — by creating a compound. However, using augmentation, rather than compounding, opens up new possibilities.

The most well-known chiral polyhedron is the snub cube. This reflection of it will be referred to here using the letter “A.”

To avoid unnecessary confusion, the same direction of rotation is used throughout this post. Apart from that, though, the image below, “Snub Cube B,” is the reflection of the first snub cube shown.

There are many ways to modify polyhedra, and one of them is augmentation. One way to augment a snub cube is to attach additional snub cubes to each square face of a central snub cube, creating a cluster of seven snub cubes. In the next image, all seven are of the “A” variety.

If one examines the reflection of this cluster of seven “A” snub cubes, all seven, in the reflection, are of the “B” variety, as shown here:

With simple seven-part snub-cube  clusters formed by augmentation of a central snub cube’s square faces by six snub cubes of identical chirality to each other, this exhausts the four possibilities. However, multiplying the possibilities would be easy, by adding more components, using other polyhedra, mixing chiralities within the set of polyhedra added during an augmentation, and/or mixing consistent and inconsistent chirality, at different stages of the growth of a polyhedral cluster formed via repeated augmentation.

All the images in this post were created using Stella 4d, which you can try for yourself at this website.

Two polyhedra are shown in this post — one which is chiral, and a similar one which is not. The non-chiral polyhedron in this pair is above. Its mirror-image is not any different from itself, except if you consider the direction of rotation.

The similar polyhedron below, however, features an overall “twist,” causing it to qualify as a chiral polyhedron. In its mirror-image (not shown, unless you use a mirror to make it visible), the “twisting” goes in the opposite direction. The direction of rotation would be reversed as well, of course, in a reflected image.

Multiple terms exist for mirror-image pairs of chiral polyhedra, the most well-known of which are the snub cube ansd snub dodecahedron, two of the thirteen Archimedean Solids. Some prefer to call them “enantiomers,” but many others prefer the more familiar term “reflections,” which I often use. I’ve also seen such polyhedra referred to as “left-handed” and “right-handed” forms, but I avoid these anthropomorphic terms related to handedness, simply because, if there is an established rule which would let me know whether any given chiral polyhedron is left- or right-handed, I’m not familiar with it. (Also, polyhedra do not have hands.) I could not, therefore, tell you if the example shown above would be correctly described as left- or right-handed — either because no such rule exists, or there is such a rule, but it is unknown to me. If the latter, I would appreciate it if someone would provide the details in a comment.

Both images above were created with Stella 4d, software you can try, for free, right here.

I estimate that the Democratic Party only gets about half its votes from Democrats. The other half come from people who, like me, are not Democrats . . . but also can’t stand Republicans, and make a habit of voting against them.

If you switch “Democrat” and “Republican” in that sentence, and remove “like me,” I wonder if it’s also true, the other way around?

Oh, wait . . . it is, as evidenced by numerous non-GOP supporters of the Tea Party.

Now I realize I am, mathematipolitically, a reflection of the Tea Party, over the line dividing Democrats and Republicans. No wonder they bug me so much. 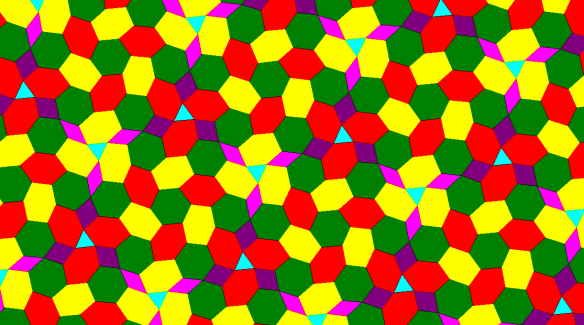 In this chiral tessellation, the blue triangles and green hexagons are regular. The yellow hexagons are “Golden Hexagons,” which are what you get if you reflect a regular pentagon over one of its own diagonals, then unify the two reflections. The pink and purple quadrilaterals are two types of rhombi, and the red hexagons are a third type of equilateral hexagon. All of the edges of all polygons here have the same length.

When I try to generate the mirror-image of this tessellation, it overloads Geometer’s Sketchpad, and crashes the program. However, inverting the colors of the same reflection, in MS-Paint, to make a color-variant, is easy: 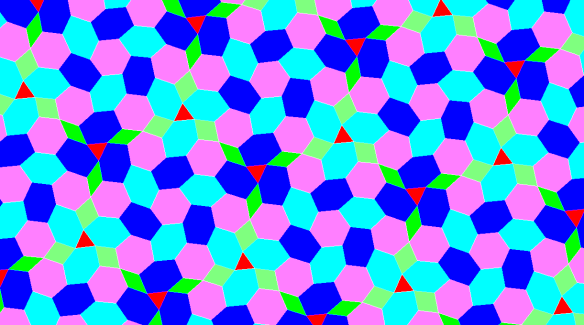 Each circle shown is in one of the reflection-planes of this polyhedron, which is the dual of the icosidodecahedron, an Archimedean solid.