I made these .gifs using Stella 4d: Polyhedron Navigator, which you can try for free at http://www.software3d.com/Stella.php.

For years, I have used Zometools (sold here:  http://www.zometool.com) to teach geometry. The constructions for the icosahedron and dodecahedron are easy to teach and learn, due to the use of short reds (R1s) and medium yellows (Y2s) for radii for the two of them, as shown below, with short blue (B1) struts as edges for both polyhedra.

Unexpectedly, a student (name withheld for ethical and legal reasons) combined the two models, making this:

I saw it, and wondered if the two combined Platonic solids could be expanded along the edges, to stellate both polyhedra, with medium blues (B2s), to form the great and small stellated dodecahedron. By trying it, I found out that this would require intersecting blue struts — so a Zomeball needed to be there, at the intersection. Trying, however, only told me that no available combination would fit. After several more attempts, I doubled each edge length, and added some stabilizing tiny reds (R0s), and found a combination that would work, to form a compound of the great and small stellated dodecahedron in which both edge lengths would be equal. In the standard (non-stellated) compound of the icosahedron and dodecahedron, in which the edges are perpendicular, they are unequal in length, and in the golden ratio, which is how that compound differs from the figure shown directly above.

Here’s the stabilized icosahedral core, after the doubling of the edge length:

This enabled stellation of each shape by edge-extension. Each edge had a length twice as long as a B2 added to each side — and it turns out, I discovered, that 2B2 in Zome equals B3 + B0, giving the golden ratio as one of three solutions solution to x² + 1/x = 2x (the others are one, and the golden ratio’s reciprocal). After edge-stellation to each component of the icosahedron/dodecahedron quasi-compound, this is what the end product looked like. This required assembling the model below at home, where all these pictures were taken, for one simple reason: this thing is too wide to fit through the door of my classroom, or into my car. 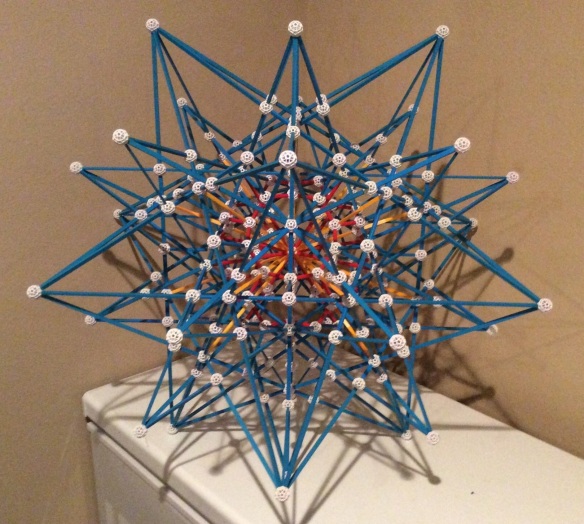 Here’s a close-up of the central region, as well.

The angle ratios of each of these triangles are also unique. The golden triangle’s angles are in a 1:2:2 ratio, while the angles of the golden gnomon are in a ratio of 1:1:3.

This process can be repeated indefinitely, in each case, creating ever-smaller triangles of each type.

Polyhedra which use these triangles, as either faces or “facelets” (the visible parts of partially-hidden faces) are not uncommon, as previously mentioned. The three most well-known examples are three of the four Kepler-Poinsot solids. In the first two shown below, the small stellated dodecahedron and the great stellated dodecahedron, the actual faces are regular star pentagons which interpenetrate, but the facelets are golden triangles.

The next example is also a Kepler-Poinsot solid: the great dodecahedron. Its actual faces are simply regular pentagons, not star pentagons, but, again, they interpenetrate, hiding much of each face from view. The visible parts, or “facelets,” are golden gnomons.

For another example of a polyhedron made of golden gnomons, I made one myself — meaning that if anyone else has ever seen this polyhedron before, this fact is unknown to me, although I cannot rule it out. I have not given it a name. It has thirty-six faces, all of which are golden gnomons. There are twelve of the larger ones, shown in yellow, and twenty-four of the smaller ones, shown in red. This polyhedron has pyritohedral symmetry (the same type of symmetry seen in the seam-pattern of a typical volleyball), and its convex hull is the icosahedron.

[Picture credits: to create the images in this post, I used both Geometer’s Sketchpad and MS-Paint for the two still, flat pictures found at the top. To make images of the four rotating polyhedra, I used a different program, Stella 4d: Polyhedron Navigator. Stella is available for purchase, with a free trial download available, at http://www.software3d.com/Stella.php.]

In this virtual model, opposite planes have the same color. The beveling of the edges, this coloring method, plus the invisibility of certain parts, make the faces appear to be extensions of triangles, or triads of “v” shapes. Without this beveling effect on this coloring-method, however, it is easy to see that the true faces of this polyhedron are star pentagons. To see this second model enlarged — with this polyhedron’s traditional coloring — simply click on it.

The site to visit if you want to know how to make .gifs like these is http://www.software3d.com/stella.php.