This is the three-dimensional version of what is called a tessellation in two dimensions. It fills space, and can be continued in all directions.

Truncated octahedra are among the special polyhedra which can fill space without leaving any gaps. There are others, as well. This image was created using Stella 4d, software you may try, for yourself, right here. There is a free “try it before you buy it” download available.

This pattern could be continued, indefinitely, into space.

Here is a second view, in rainbow color mode, and with all the squares hidden.

[These images were created with Stella 4d, software you may buy — or try for free — right here.]

As it turns out, eight icosahedra form this rhombic ring, by augmentation:

Measured from the centers of these icosahedra, the long and short diagonal of this rhombus are in a (√2):1 ratio. How do I know this? Because that’s the only rhombus which can made this polyhedron, a rhombic dodecahedron, dual to the cuboctahedron.

This rhombic dodecahedral cluster of icosahedra could be extended to fill space, since the rhombic dodecahedron itself has this property, an unusual property for polyhedra. Whether space-filling or not, the number of icosahedron per rhombic-dodecahedron edge could be increased to 5, 7, 9, or any greater odd number. Why would even numbers not work? This is a consequence of the fact that opposite faces of an icosahedron are inverted, relative to each other; a pair of icosahedra (or more than one pair, producing odd numbers > 1 when added to the vertex-icosahedron) must be attached to the one at a rhombic-dodecahedron-vertex to make these two inversions bring the triangular face back around to its original orientation, via an even number of half-rotations, without which this consruction of these icosahedral rhombi cannot happen.

Here’s another view of this rhombic dodecahedron, in “rainbow color” mode:

All images above were produced using Stella 4d, software which may be tried for free right here.

Next, augment its faces with more rhombic triacontahedra — but not all thirty faces. Instead, only augment six of them — the six which lie along mutually-perpendicular x-, y-, and z-axes. Another way to look at this is that you only augment the North, South, East, West, top, and bottom faces.

The number of rhombic triacontahedra at each point in this series of geometric shapes is, itself, interesting. Here’s what we have so far.

Here is the next octahedral lattice of rhombic triacontahedra, with n = 6.

This did help:  it helped me avoid a dead end (later edit:  or so I thought). I had noticed that the first six terms (1, 7, 25, 63, 129, 231) stayed close to, or matched exactly, the cubes of the first six counting numbers (1, 8, 27, 64, 125, 216), with only the sixth term deviating far from the sixth perfect cube. With the seventh term, 377, the deviation from the seventh perfect cube, 343, grows even wider, so, at this point, I don’t think the solution is related to perfect cubes in any way. (However, please keep reading; sometimes things which appear to be mathematical dead ends are actually only illusions of dead ends.) 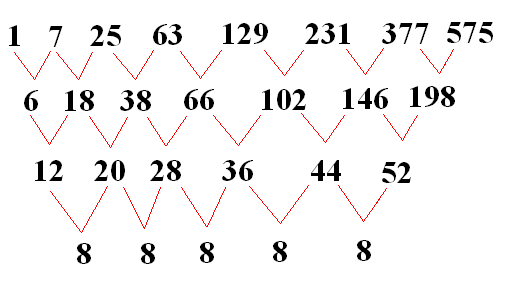 Now this is helpful! It tells me that the solution to this problem will take the form a third-order polynomial, also known as a cubic equation — so my earlier idea that this sequence was not related to the perfect cubes was, I now know, completely false.

I next struggled, for several hours, to find the cubic equation for the solution to this problem, without success. After finally giving up on finding the solution myself, I asked my wife to assist me (she’s also a math teacher, and her knowledge of algebra exceeds my own, for I specialize in geometry). She performed a cubic regression, and this is how we now know that the solution to this problem is that the number of cells for the nth figure in this sequence equals (4/3)n3 – 2n2 + (8/3)n – 1. I spent many hours on this problem, but my wife finished solving it in mere minutes!

It’s no wonder I couldn’t find this solution, for I was only considering integers as coefficients, since only whole numbers for answers make sense — which I thought, incorrectly, would require the coefficients to be integers. However, for every value of n I have tested, the number of thirds in the answer always ends up being a multiple of three, cancelling threes in all denominators, and yielding whole numbers for answers. In retrospect, this makes sense, considering that the octahedron is a dipyramid, and that there is a 1/3 in the pyramid’s volume formula.

I was originally seeking to make an informative and interesting blog-post when I started this. However, I didn’t anticipate that I would learn as much as I did from the experience. I’m giving my wife joint credit for this solution, for I would not have been able to solve this problem without her help.

[Later edit:   more information about this sequence can be found on these two websites: http://en.wikipedia.org/wiki/Centered_octahedral_number and https://oeis.org/A001845. I did not know about these sites until after I had finished this post.]

The second image here resulted from stellating the first one many times. It can be enlarged with a click.

The software used to create these rotating images, Stella 4d, may be tried for free at http://www.software3d.com/Stella.php.