There is a chemical element, bismuth, which many people — even chemists — think has at least one stable isotope. However, the truth, discovered in 2003 (but still not well-known), is that it has no stable isotopes, but does have one with an extremely long half-life — so long that it, and other isotopes with similarly-long half-lives, are often deemed “effectively stable.” Bismuth is shown in green on the table, and its “effectively stable” isotope, bismuth-209,  has a half-life of at least 1.9 x 1019 years. For comparison, it has “only” been ~1.38 x 1010 years since the Big Bang. Bismuth-209’s half-life is, therefore, over a billion times longer than the total amount of time which has existed, so far. 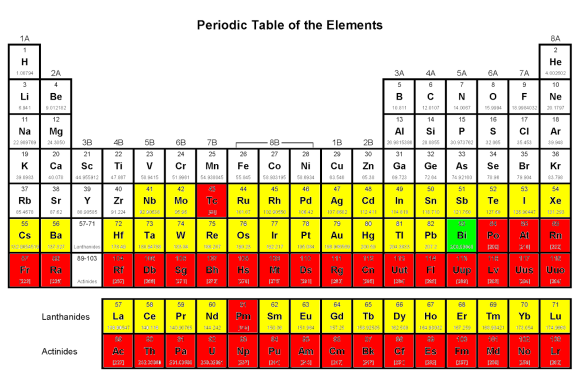 In addition, the yellow boxes indicate elements which have only radioactive and “observationally stable” isotopes. “Observationally stable” means that radioactivity (in some cases, even the spontaneous-fission variety), with an extremely long half-life, is predicted, or at least thought to be possible, but no actual decay has yet been observed — so the yellow elements’ perhaps-stable, perhaps-not isotopes are “on watch.” The red boxes, by contrast, are for elements which have been long-known to have no stable isotopes.

None of this takes into consideration the unresolved issue of hypothesized long-term proton decay. If protons turn out to be unstable, all atoms likely are as well, unless simply having them exist in atoms somehow stabilizes them, as is the case for neutrons, which decay in isolation, but do not in stable nuclei. This is an area of uncertainty — another way of saying that this is something which needs further study.

We’re all familiar with the radiation-hazard symbol:

And, of course, the biohazard symbol: 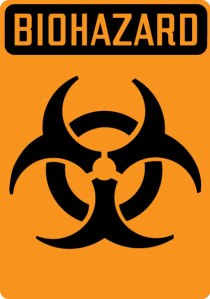 However, what if some unforeseen disaster threatens us with living, radioactive pathogens? Clearly, we need a radiobiohazard symbol for just such an eventuality, and I’m proposing the top picture here as a rough draft for one, inspired by the two already-existing warning symbols.

To the TSA, FEMA, the NSA, and the rest of the alphabet soup of “keep-us-safe” agencies: you’re welcome.