Much is now being written about ebola, for obvious reasons. I previously addressed the subject, on this blog, before the news became flooded with ebola-stories (my post was made in late July), and I did so mathematically (because that’s the way I am), right here: https://robertlovespi.wordpress.com/2014/07/31/a-graph-of-infections-and-deaths-during-the-first-four-months-of-the-2014-ebola-outbreak/.

While I am pleased that ebola is now getting more attention in the media, I am not at all pleased about the continuing spread of this epidemic — and am also utterly horrified by the misinformation being disseminated, by many writers, on the subject. Some of what is now being written makes sense, but much of it does not. Here are four examples of logical, and well-written, information on this timely subject:

B. http://www.theepochtimes.com/n3/993247-ebola-zombies-article-says-3rd-person-rose-from-the-dead-still-false/ (only “likely false,” according to the opening sentence)

I enjoy zombie movies as much as anyone, but let’s be clear on this:  people who have died from ebola do not rise from the dead! Also, no, the ebola viruses were not created deliberately for genocidal purposes, or any other purpose. Conspiracy theories, on any subject, are all false, for one simple reason: large-scale conspiracies require many human beings to keep real information (as opposed to misinformation) secret, for long periods of time, and that simply doesn’t happen. As an old saying puts it, “three men can keep a secret — if two of them are dead.”

There is an out-of-control ebola epidemic raging in several African nations, and a real risk exists of widespread outbreaks forming on other continents, since cases already exist in both North America and Europe. However, there is also a second problem:  we are already in the middle of a worldwide ebola panic. This second problem will not help with the first problem — at all. In fact, the exact opposite is true.

What will help? Rational, clear thinking — as well as deliberate, well-considered, intelligent, rapid, and well-funded action. The unfortunate truth is that no such action happened much earlier, but that error cannot be unmade, for time travel into the past is physically impossible. What is possible is for intelligent action to be taken now.

How does one separate the “wheat from the chaff” — or, in this case, the real information from the misinformation? I know of only a few ways to do this: think about what you read, and think, then rethink, about what you write (and then post on the Internet) — and, if you don’t know what you’re talking about, well . . . just shut up. Please. 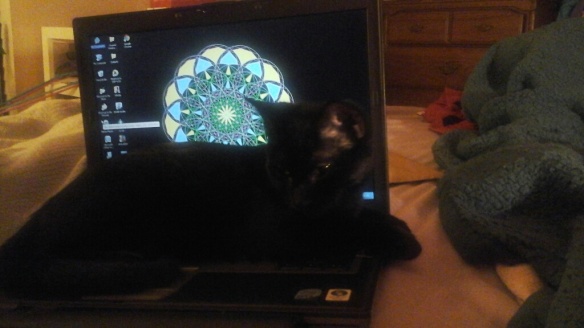 Tonight’s feline insanity started while we were watching Star Trek — the episode where Captain Kirk and Mr. Spock go up against a planet full of nuclear-armed Space Nazis.

Apparently, cats — or, at least, this cat — find Nazis disturbing, which, of course, they were — and will be again, if they appear in the 23rd Century . . . because some half-crazed future historian went and violated the Prime Directive, becoming, a few years later, a fully-crazed future historian. Jynx was so incredibly disturbed by the Space Nazis, in fact, that he bounced over pillows and blankets, in a series of nicely Newtonian . . .

. . . parabolic arcs, to land on my computer. He then proceeded to pause the episode — then close my browser (the picture-moment, with my wife laughing hysterically as she took it), and finally tried to bite the heads off several Space Nazis as the screen slowly darkened. After due consideration, Jynx decided this was not enough, and so, next, he reached out a paw, and quickly turned my computer completely off. A smug look followed. You haven’t seen a look this smug, unless, maybe, you’ve also seen one on the face of a kitten.

I hope my computer lives long enough for this post to make it to my blog. In the meantime, Jynx reigns — OW! — triumphant.

[2016 update: that computer is now officially dead. Jynx the Cat lives on.]