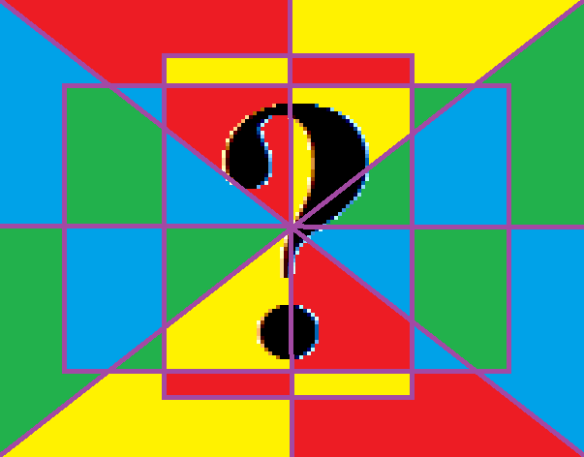 A major challenge for many Aspies (an informal name many of those with Asperger’s use for ourselves) is communication with the larger, non-Aspie population. Frustration and anger are common reactions to this challenge — sometimes from both sides. The reasons for this are known: these two parts of the population use language quite differently. Aspies tend to use and interpret language in absolute, literal terms, to a point that seems odd to most. Non-Aspies, by contrast, are often more flexible with use of language, and are (somehow) able to convey ideas between themselves using words which mean the exact opposite of their literal meaning. (Several examples will follow.) This difference is all that is required to explain why Aspies and non-Aspies often have trouble communicating with each other.

Just as with most people, Aspies are quite different from each other, but we also have some traits in common. For example, an intense urge to study and analyze some esoteric subject, which few others care about, is common — but the identity of that subject, or subjects, varies widely from one Aspie to another. My special interests all involve puzzles; I enjoy trying to figure out mathematical, scientific, and linguistic problems, in particular. Another Aspie might share none of those interests, but might be able to rattle off, say, hundreds of sports statistics, as easily as I can list the names of dozens of polyhedra. The existence of these “special interests,” as they are known, is (nearly?) universal among Aspies, but the topic of these special interests is not. For example, fewer than 1% of the Aspie population shares my obsession with polyhedra — a fact I know because the world’s most-focused “polyhedra people” are so uncommon that we have established many lines of communication between each other, enabling the formation of a rough estimate of this population. My estimate is ~300 people, worldwide. Even if I am off by a factor of ten, that simply isn’t nearly as many people as 1/10th of 1% of the world’s rapidly-growing Aspie population.

In my experience, medical terminology, in particular, has provided large numbers of baffling puzzles over the years. When talking to medically-trained professionals, I always let them know I am a teacher of science and mathematics. This lets them know that they need not hold back with medical jargon, which has a large overlap with scientific and mathematical jargon. I can understand it fairly well, and, when an unfamiliar term is used, I simply ask for a definition. When I need to, I take notes. If medical instructions are not clear, precise, literal, and detailed, people can die as a result. For this reason, such instructions generally are written in a precise, literal form of English which is a beter match for “Aspiespeak” than what we typically hear from non-Aspies.

On the other hand, when I speak to non-Aspies about medical subjects, I often get quite confused, and I suspect this happens with many other Aspies, as well. Examples follow.

“Nerve pills” — As someone who takes prescribed medication for the relief of anxiety (which is the way a doctor or pharmacist would likely phrase it), I have occasionally been asked if I might benefit from taking a “nerve pill.” Before remembering the translation of this term, I always think, and sometimes say, something along these lines: “I’m already nervous. Why would I take a pill to make me more nervous?” It’s the implied, omitted parts of the phrase, of course, that contribute to my confusion. As it is, this practice makes me wonder why we don’t call deodorant “oderant” instead, a term coined by Jerry Seinfeld, since that would make equally little sense, but would at least be consistent.

The most confusing informal medical term like this which I hear, though, is the term “crazy pills.” I don’t hide the fact that I obtain professional help for mental health issues, and explained my reasons for this openness here. Most of those who do seek treatment for mental health problems, though, are not Aspies, and so it is quite common to hear such treatment, in the form of medication, referred to by this confusing term, which I must admit I intensely dislike. For one thing, the word “crazy” is not one to use lightly, due to the fact that it has been used, historically, to stigmatize those who need help maintaining or restoring mental health. For another, the literal meaning of “crazy pills” is the exact opposite of its in-use meaning.

The term I use to replace “crazy pills,” in my own speech, is “sanity pills.” Sanity is, after all, my preferred state, and that is the reason the psychiatry-related category on this blog is named “Mental Health,” not “Mental Illness.” Reminders that mental health is the goal are helpful; the opposite focus is not.

Puzzles like this (figuring out non-literal terms used by non-Aspies) are not my favorite kind; in fact, I don’t enjoy them at all, for little or no logic is involved, and any pattern which might help me learn these things more easily has, so far, eluded me. Non-Aspies seem to just intuitively “know” what such phrases mean, as if they got a memo which was deliberately withheld from Aspies — and that is, for me (and many of us), both baffling, and irritating. Can I understand these things? Yes, with difficulty — I have to figure them out, step by step, each time, due to the fact that they do not make logical, literal sense, and thus do not come naturally to me. In fact, studying calculus was easier than understanding these common phrases which nearly everyone else just seems to somehow “know,” as if the knowledge was sent to them telepathically, but deliberately withheld from me, for reasons unknown.

For a fictional depiction of Aspie/non-Aspie confusion, this clip from Star Trek: The Next Generation, while not medically-oriented, does illustrate this commuication-problem in a humorous fashion. When the character of Data was created, some “Aspie” characteristics were deliberately included, just as they were for Mr. Spock, his predecessor. Some Aspies have criticized the Star Trek franchise for these practices, but I, personally, think they have been helpful, in that they use humor to try to bridge the currently-existing comprehension-gap. This gap is not helpful, so anything that narrows it is something I like.

I was recently diagnosed with sleep apnea. As a result, I now have a CPAP machine, on me and running, for the first time at home. The headgear reminds me of the uniform Alex Summers wears, as Havok of the X-Men, except that his nose isn’t covered, as mine is. I also have shown no ability to focus the energy from cosmic rays at targets of my choice, or anything remotely like that . . . at least not yet.

Others seem to think I look a tad more ridiculous, however.

As far as how I sound, I literally have to keep my big mouth shut for this thing to work, so my wife (without whose help I couldn’t have gotten into this contraption) always gets the last word now. (Also last snicker, etc., as she just pointed out to me, happy that she can talk, without risk of interruption, for a change.) As she was putting it on, though, I talked as much as I could, until she reminded me that I’m not supposed to talk while, um, “CPAPping.” However, my last bit of chatter for the night sounded like Darth Vader doing an impersonation of Stephen Hawking. 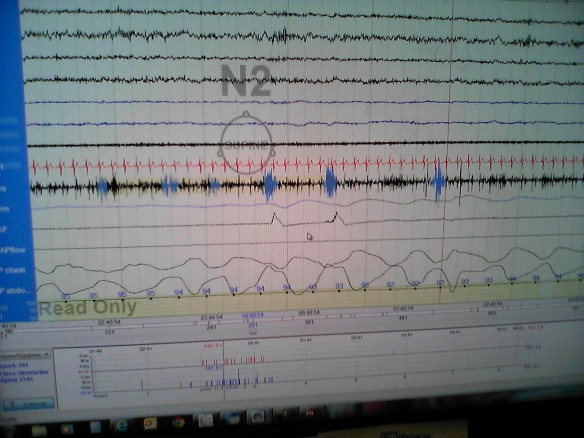 A doctor needed to look at my brainwaves (and a bunch of other MSLs, also known as “medical squiggly lines”), as recorded during a sleep study, so of course I asked him if I could see them myself. Who wouldn’t want to see their own brainwaves?