After defining these terms, I used Geometer’s Sketchpad to construct a right triangle containing a 10º angle, and then used the “measure” and “calculate” functions to find the values of pers(10º), perc(10º), and pert(10º). Since these are ratios, they would have the same values shown for larger or smaller right triangles which contain 10º angles.

Of course, I wanted to know more than just the pers, perc, and pert values for 10º, but I had no desire to repeat the same calculations, many more times, to form a table. Instead, I simply graphed the functions, again using Geometer’s Sketchpad. The units on the x-axis are degrees, not radians.

Entering the equations for these curves was a little tricky, due to the fact that I wanted this graph to venture beyond 0 and 90 degrees, in both directions, on the x-axis. When that is done, the unit circle must be used (in place of right-triangle based definitions), simply because no right triangles contain angles outside this range. The radius of the unit circle is 1, by definition, and that is the hypotenuse of the right triangle which exists in the zero-to-ninety degree part of the domain of the graph above. As a consequence of setting the length of the hypotenuse of each right triangle at 1, the side opposite the angle in question (used for persine) becomes, simply, the sine of that angle, while the adjacent leg’s length is the angle’s cosine. It then follows that the perimeter (the denominator of the pers, perc, and pert ratios) is equal to sin(x) + cos(x) + 1.

Calculations are shown on the graph above, and you can click on the graph to enlarge it, to make them more readable. In these calculations, one more adjustment had to be made, and that was to the perimeter portion of each pertrigonometric ratio. Using sin(x) + cos(x) + 1 works fine for perimeter, for the zero-to-ninety degree portion of the domain, but, outside that, negative numbers intrude, for values of sin(x) and/or cos(x). It is my contention that triangle perimeter only makes sense as a sum of absolute values of a triangle’s three side lengths. To obtain absolute values for both sin(x) and cos(x) in the perimeter-part of each calculation, then, I simply squared each of these two functions, and then took the square roots of those squares. The result of this can be seen on the graph, in the curve for the pertangent function, which resembles a child’s drawing of waves in the ocean. On the y-axis, it never reaches as low as 0.4, and its maximum value is clearly exactly 0.5 — at the sharp “wave peaks.” At the (smooth) troughs, the actual minimum is equal to the square root of two, minus one, or ~0.414, although I have not yet figured out exactly why that is the case — I simply noticed it on the graph — but, to investigate it further, I know where to look: the 45-45-90 triangle, since these minima are hit when x = (45 ± 90n) degrees, where n is any integer. The pertangent function has the shortest period of all the functions shown above, at a mere 90º. For tangent, by contrast, the period is 180º. All four of the other functions shown have periods of a full 360º.

There is a simple reason why persine, percosine, and pertangent all peak at exactly y = ½. All three functions generalize, for acute angles, to this ratio — (some side of a right triangle)/(perimeter of that same triangle) — and no side of any triangle can ever exceed, nor even reach, half that same triangle’s perimeter. In all three cases, the maximum y-value is only reached, even in the zero-to-ninety degree portion of the domain, for “degenerate cases” — angles of 0º or 90º, which are, of course, not acute angles at all. Interpreted as triangles, these are cases where either a triangle becomes so short that it collapses to a single segment, or the opposite degenerate situation: two parallel lines, connected by a single segment. If you try to make either (or both) of the acute angles in a right triangle into an additional right angle, after all, that’s what you get.

To my knowledge, no one has described these pertrigonometric functions before, by this or any other name, although I could be wrong. (If I am wrong on this point, please let me know in a comment.) Regardless of whether this is their first appearance, or not, I did not invent them. The reason for this is simple: nothing in mathematics is ever “invented” — only discovered — for mathematics existed long before human beings existed, let alone started writing things down. How do I know this? Simple: there was a universe here before there were people, and all evidence indicates that it operated under the same laws of physics we observe today — and all evidence to date also indicates that those laws are mathematical in nature. Therefore, with the “pertrig” functions, I either discovered them, or, if they have been found before, then I independently rediscovered them.

Finally, I’ll address that question so often asked, about numerous things, in mathematics classes: what are these pertrigonometric functions used for? As far as I know, the answer in this case, so far, is absolutely nothing, other than delighting me by their very existence. It is possible that this may change, for someone might find a way to make a profitable application of these functions — and I won’t get any money if they do, either, for I am not copyrighting any of this. Nothing in mathematics is subject to ownership.

Honestly, though, I hope no one ever finds any practical, “real-world” use, at all, for pers, perc, or pert. Right now, they are pure mathematical ideas, unsullied by tawdry, real-world applications, and, well, I like that. I am far from the only person who ever had such an attitude about a mathematical idea, either — such views are actually fairly common in the mathematical community. Most of those who try to discover previously-unseen things in mathematics do so solely, or primarily, for one reason: the joy of discovery, in its purest form.

The sine and cosine curves themselves are shown for reference, and all four possible combinations of sine and/or cosine which nest one function inside another (with values for the outer function to evaluate ranging from -2π to 2π) are also shown.

To make the virtual “painting” above, I plotted simple and moderately-complex trigonometric functions on a single coordinate plane, as shown below, using Geometer’s Sketchpad. I then erased all the text, etc., copied-and-pasted a screenshot into MS-Paint, and used that program to make the finished image above.

[Note:  If you haven’t yet read part one, it is recommended to read it first, before reading this part.  Part one is the most recent post here, before this one.]

In part one, a special circumsinusoidal region was described, bounded by parts of semicircles, and a sine or cosine wave.  As previously described, this requires that the wave’s amplitude be exactly one-fourth the wavelength. Of course, most sinusoidal waves do not have amplitudes and wavelengths that fall nicely into a 1:4 ratio. What happens, then, with the majority of waves — the ones with with other amplitude:wavelength ratios? Can they still be used for forming circumsinusoidal regions? The answer is yes — but the cost required is that semicircles may no longer by used in their construction.

A semicircle can be thought of as a 180 degree arc, if the diameter, often considered part of its perimeter, is ignored. When the sine or cosine wave’s amplitude:wavelength ratio is not equal to 1:4, the only necessary adjustments for the circular arcs needed to define particular circumsinusoidal regions are identical changes in the angular size of each arc used, plus translations of the centers of the circles which contain each of these circular arcs. These translations move those circle-centers away from the line representing the wave’s rest position, in a direction perpendicular to that line. There are two cases to consider:  shorter-amplitude waves (those with an amplitude:wavelength ratio smaller than 1:4), and taller-amplitude waves (where the same ratio is greater than 1:4). The first picture below shows the shorter-amplitude case.

For every half-wavelength which starts at the rest position, an arc through three points is needed for the outer bound of the circumsinusoidal regions, which are shown in yellow. Those three points are two consecutive points (such as A and C above) where the sinusoidal wave crosses the rest position, plus the point at the top of the wave crest (such as B), or the point at the bottom of the trough, exactly half-way along the sinusoidal curve, in-between the two consecutive rest-position points under examination. In this example using points A, B, and C, above, the circle containing those points was constructed by drawing segments AB and BC, and then constructing the perpendicular bisectors of those two segments. Thone perpendicular disectors intersect at some point D, which is the center of a circle containing A, B, and C. The part of this circle which is not used for the arc through A, B, and C is shown as a dashed arc, while the arc used is shown as a solid curve. For other half-waves, to the left or right of this circle and arc, the construction would proceed in the same fashion, but is not shown, for the sake of clarity.

The taller-wavelength case also can be constructed, using the same procedure, as shown below. 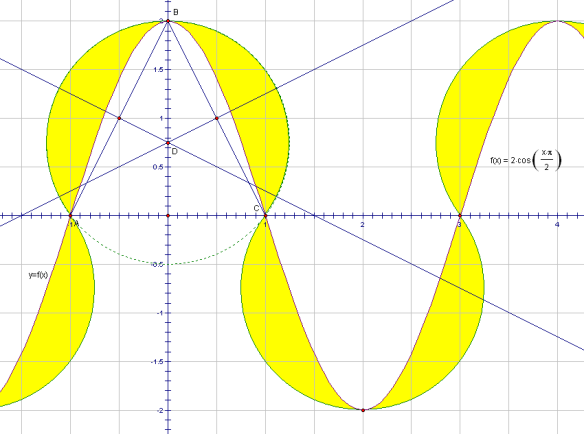 These regions, of course, have area. To determine the exact area of any circumsinusoidal region requires integral calculus, and this area is equal to the difference in the areas under two different types of curve. Without calculus, the best that can be found for these areas are mere approximations, not exact answers. I am leaving this find-the-area problem for mathematicians who have a better understanding of calculus than I possess. 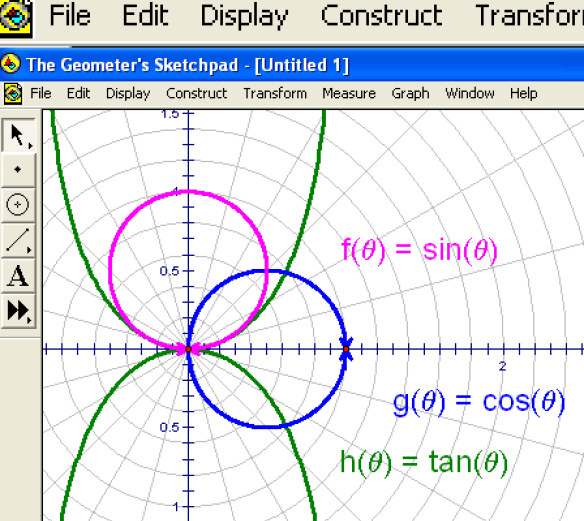 The last post made me curious about other trigonometric functions’ graphs, in a polar coordinate system. They were not what I expected. Here they are. 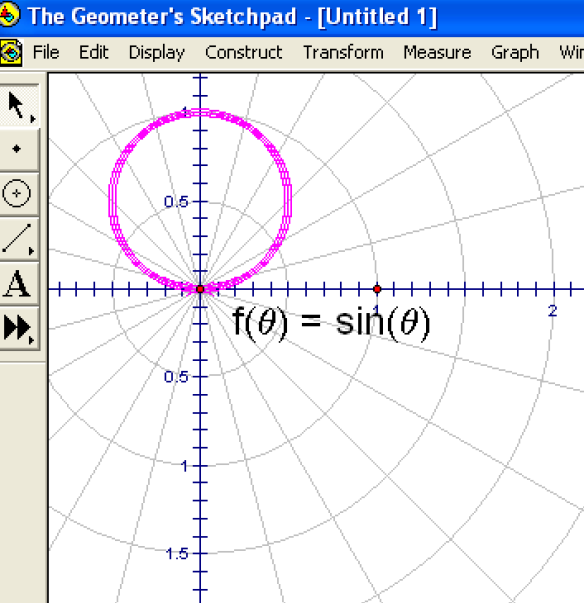 When y=sin(x) is plotted on a polar coordinate system, with everything set, consistently, to radians, the resulting graph is a circle sitting atop the origin, with unit diameter.