Photo credit: USA Today. Adding the words “total disgrace” to the picture was my idea.

Presented with apologies to Bill Watterson. 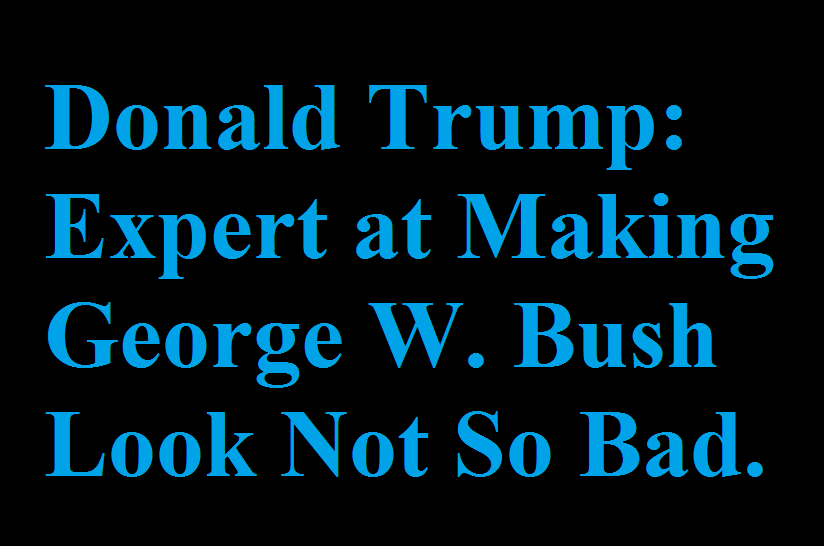 It’s easy to throw words like “fascism” around without really thinking about their definitions . . . so I looked the word up, to reexamine it. In my opinion, the “shoe fits,” as the saying goes, whether you call it “American fascism,” or simply “Trumpism.” Just look at the details of the Google-provided definition above:

What’s more, all of this is apparent after Donald Trump has been in office for only a week.

The current American election cycle was predicted, with amazing accuracy, in the late 20th Century, by Bill Watterson, the creator of Calvin and Hobbes. Evidence will follow. We’ll start with ignorance and apathy, both of which are certainly involved in American elections.

Not wanting to vote and not being allowed to vote are, of course, two different things to Calvin.

While he’s being ignorant and apathetic, Calvin is, at least, honest. Honesty is something which we definitely need, and currently do not have, in American politics, from the left or the right. 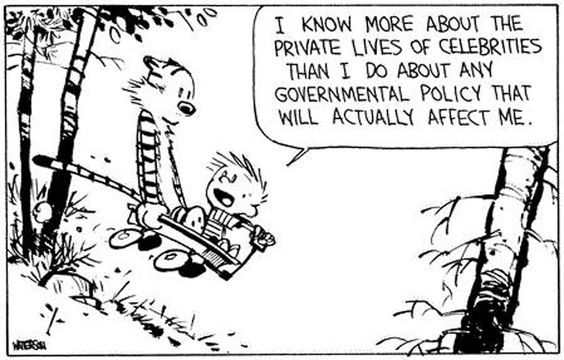 If only this fictional duo qualified under the Constitution, we’d be facing this choice, which certainly seems better than the choice we actually have:

Watterson understood, well, the corrupting role of money in politics.

The big issue politicians do not talk about enough is the environment. Why do they not devote more energy to that? Money, of course. The love of money drives people to do harmful and irrational things, and this includes things with obviously-negative environmental impact.

He also created numerous cartoons about pollsters and lobbyists, taking them every bit as seriously as these people deserve to be taken.

America has a lot of single-issue voters. They are not safe from Watterson’s satire. This cartoon is as on-target today as it was when it first appeared.

For what purposes was Calvin willing to do research? Could his spray-painting ambitions include negative campaign ads?

I certainly think so.

The next cartoon applies equally well, in my opinion, to the words and actions of both Donald Trump and Hillary Clinton.

If the next cartoon doesn’t remind you of the Trump-or-Clinton choice we face, and what an amazing waste of time and energy it is to have to make such an absurd “choice,” please read it again.

Finally, here’s Calvin’s invention of the perfect bipartisan slogan for this campaign season, and its nausea-inducing choice between bad (Clinton) and worse (Trump).

[To obtain all these cartoons, and many more, I recommend purchasing this boxed set: the complete collection of Calvin and Hobbes.]

I have a set of conjectures, and want input from my friends and blog-followers about them. How much of this has actually happened over the past months, weeks, and days?
1. The Chinese have been buying huge amounts of silver, thus driving up its price, because…
2. The political and business leaders in Greater China are, themselves, sick of living in an environmental nightmare based on decades of high consumption of oil and dirty coal, and are working on building enormous numbers of solar panels to get away from fossil fuel consumption, using lots of silver, which has the highest reflectivity of any element. China’s silver buying-spree is being misinterpreted, globally, because China is not well-understood, outside China.
3. These leaders of China have to breathe the same air, for one thing, as many Chinese people with much less power, and going green is the pragmatic thing to do. It is quite Chinese to be pragmatic. Living in Shanghai, Beijing, Hong Kong, Taipei, or other population centers, air quality is a major issue, as is global warming and other environmental concerns — all issues which many Americans are in the habit of ignoring.
4. As the Chinese phase themselves out of the human addiction to fossil fuels, total global oil consumption drops. Evidence: gasoline prices fell. I was buying for under $2 a gallon a week ago.
5. Falling oil prices have led to severe economic problems in the oil-producing countries of the Middle East. Higher-than-usual amounts of political stability have rippled through the Middle East through the last five years, and this has intensified further in recent months. The latest such development has been in Turkey, often seen as the most politically stable country in the Muslim world, is going through an attempted(?) coup, on the far side of the Middle East from China.
6. In the USA, one of the people running for president is a reactionary xenophobe, as well as a populist demagogue, and is running against an opponent with little to no ethical principles who is winning by default because she’s running against Trump. Donald Trump and his people (and he has a lot of people) have been spewing Islamophobia and Sinophobia, and they’ve been doing it loudly.
7. Many people all over the world are reacting to the Trump Trumpet o’ Hate, and freaking out. Various end-of-the-world scenarios are been floated publicly, especially in cyberspace. People are getting “off the grid” if they can, either because it’s a good idea, or because they’re panicked. In some places, efforts are actually being made to use the force of government to stop people from weaning themselves off the services of utility companies.
8. Few people realize that a lot of this is a set of unintended consequences of China (of all nations) leading the charge to do the right thing regarding oil addiction, from an environmental and ecological point of view, plus having a lunatic run for the White House.
9. The rising price of silver, panic-in-advance about a widely-expected coming collapse of fiat currencies, and the pronouncements and predictions of Ron Paul and his ilk, are all feeding off each other, in an accelerating spiral. In the meantime, the political instability in Turkey is capping off a slight rise in gas prices over recent lows, just in the last week.
10. Most Americans don’t know much about a lot of this because we’re at a point in the current, nasty election cycle that America as a people has simply forgotten (again) that the world outside the United States actually exists. Ignorance about the Middle East, economics, environmental science, and Greater China is widespread in the best of times. Thanks to (a) the “Donald and Hillary Show” playing 24/7 on cable news, (b) civil unrest at home (brutality on the part of some, but not all, police), and (c) a backlash against Black Lives Matter, with horrible behavior from some, but not all, of the protesters on all sides, and (d) an anti-or re-backlash against BLM is in “full throttle” right now, and (e) unrest abroad (Turkey, etc.), these certainly aren’t the best of times.
I invite anyone to weigh in on the subject of which of the above conjectures are valid, and which are invalid. I have deliberately cited no sources, yet, because I am asking for independent peer review, and so do not wish to suggest sources at this point. In addition to “Which of these statements are correct, and which are wrong?” I am also asking, “What am I missing?”

How to become the first female president of the United States:
1. Beat an openly-declared socialist in the primary.
2. Beat Donald J. Trump, in a popularity contest, in November.
Am I missing anything?
~~~
[Image source: https://en.wikipedia.org/wiki/White_House]

I am sick of certain Bernie Sanders supporters who write about the “Hitlarites” who support Hillary Clinton.

I am also sick of the Hillary Clinton supporters who mock her opponent as “Barnie” Sanders, as in Barney the Clown, or perhaps Barney the purple dinosaur.

My guess is that both Hillary Clinton and Bernie Sanders, themselves, are embarrassed by these rude factions of their own supporters, and wish they would just shut up, and sit down.

They’re not helping anyone, except for Donald Trump.

I’m not a Democrat. On the other hand, the Republicans are not in the habit of giving me any other viable options.

A self-righteous megalomaniac. Several far-right wingnuts, from a party rapidly making itself irrelevant by trying to live in the past. A big-government advocate with a past history of questionable ethical practices. And, to round out the lot, an actual socialist.

Sigh. I wish we could vote for “none of the above,” and just leave the White House empty for four years.

Next-best option, in my opinion: if we must have a Clinton, bring back Socks the Cat.